The three sets of the gears below, turning slowly and steadily, represent three separate machines. It is these three machines that, when coupled, move the organization to the right in the table above.

Bring the perfect prospect to the Salesperson.

Bring the perfect prospect to the Salesperson.

As these three machines merge into one, their components (each gear set, each gear, and each tooth on each gear) with their unique function make the Business Development Machine. Now, functioning as one with the energy and torque supplied by the Leader through the leader’s carefully selected Leadership Team, the organization will grow and increase in value. This will happen at precisely the same rate as the Leader and the Leadership Team are capable of keeping these gears working together, uninterrupted.

Methods of Growth – Organic and Acquisition

Organic growth takes place as you do more work with existing customers, add new ones, and increase the amount of work you do with each new customer that is acquired. Of the two methods of growth, this is the more important.  It is worth noting that your systems must be maintained and improved for organic growth to continue.

Growth through acquisition can complement and leverage organic growth if systems are in place to absorb the acquired company. An acquisition can be exciting and wonderful, or terrible; a great deal depends on the quality of the systems of the acquiring organization.

The growth charts below are simply a model for comparison. This topic will become increasingly clear as we move forward. 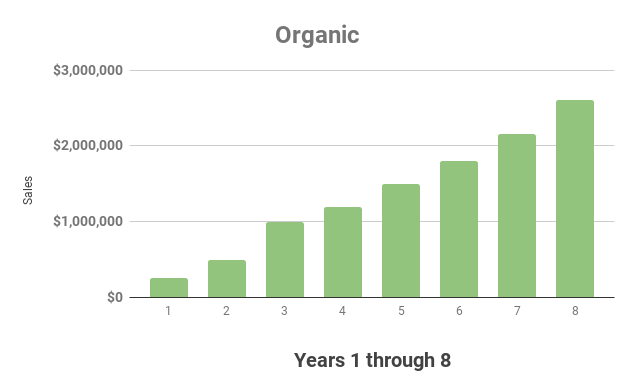 Rapid growth for the first three years with roughly 20% for years four through eight. 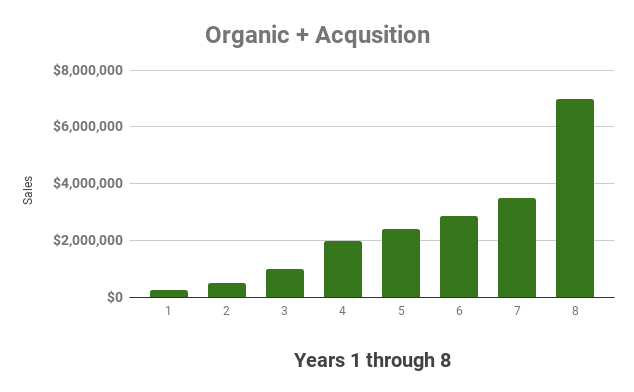 The same growth for the first three years as in the Organic model; acquire an organization of equal size in year four; absorb the acquisition and grow steadily for the next three years; make the second acquisition in year eight.

The Principles and Rules discussed in greater depth in chapters six through eleven, now being introduced for the first time here, have existed, in their most general sense, for as long as people have been on this earth. There have been other words and terms used to represent their concepts. They have appeared in many variations, depending on the occasion. So I should note that these Principles and Rules, along with the other terms I’ve chosen for the purposes of this book, are not of my making, but they, much like the law of gravity, appear to simply be true. I have, through my own practices, as well as observing of others, accumulated a good deal of evidence to support this conclusion. I am beginning to grasp the certainty of it.

Adhering to sound Principles and following the Rules produce a better outcome than ignoring and avoiding them. I mention this here because it is the use of these Principles and Rules that make building the Business Development Machine straightforward; I did not say easy, but straightforward. The Machine can indeed be built, and it has been my experience that the return justifies the investment.

It is important to understand that this Machine is not, in any respect, restrictive. It does not impair creativity; to the contrary, it provides a structure upon which a seemingly infinite number of variations of products, services, and methods can be assembled and delivered. We are limited only by our imagination. An example of this might be housing, just look around your own town or city, there are many variations that come from a foundation, framing, and a roof.